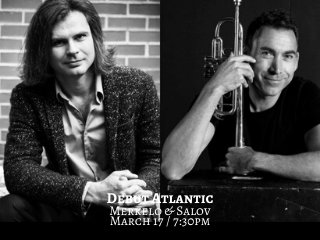 Renowned as one of the finest trumpet players of his generation, Paul Merkelo is recognized for his “unusual lyrical gifts’’ (Gramophone) as well as his “pure technical prowess’’ (Rochester Democrat & Chronicle). Principal trumpet with the Montreal Symphony Orchestra since 1995, Merkelo is regularly praised by the Montreal press as “a spectacular soloist… a most impressive master of his instrument’’ (Montreal Gazette), and a “great virtuoso” and “dazzling’’ (La Presse). He has been featured frequently with the OSM, including tours to South America and the Lincoln Center in New York, along with several world premiere works. Most recently, he has released a solo recording with Maestro Kent Nagano and the OSM entitled French Trumpet Concertos, which was a 2016 Juno Award nominee for Classical Album of the Year.

Serhiy Salov is recognized as an outstanding pianist, whose playing is both energetic and imbued with sensitivity. He is known for his remarkable technique and exacting rigour and virtuosity, qualities that unwaveringly serve the poetry inherent in the music. Public enthusiasm and critical acclaim have amply confirmed his prominent status on the international music scene as a soloist and chamber musician. In addition, Serhiy Salov has achieved distinction for his piano transcriptions of symphonic works such as Tchaikovsky’s Nutcracker, Debussy’s Nocturnes, Mussorgsky’s Night on a Bald Mountain, and many others
Upcoming Events (1)
Presenter
Get Directions