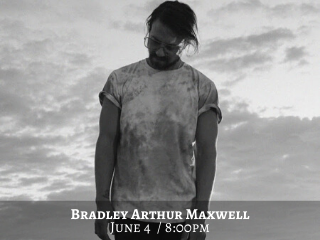 The long, hard winters, the cold winds, the ferocious uninhabited landscapes - it was my breeding ground for creativity.” Says Maxwell, proud son of Newfoundland. Grandeur and isolation on that scale do things to a musician’s head. Even now, relocated to Los Angeles, Maxwell feels “the sway of the elements” guiding him when he writes. The result is haunting minimalism that occupies the spot where ethereal Psychedelia meets Americana. His vocals are unhurried, as if he’s ambling along a lonesome footpath, breathing the air. You know that lost-in-a-moment sensation some music evokes? Maxwell’s songs do that. Earlier this year, The 405 even proclaimed him as - “One of 2019’s most exciting new voices.” His musical heroes range from Tom Petty to Radiohead to BRMC. A diverse bunch with a common thread: Each makes music from a loner viewpoint. And, Maxwell relates to that. So where to start with his music? For now, there’s his debut single, “Easy On Me”. Subtly constructed of reverb, minor chords and guitar, it’s a primer to the Maxwell sound. Not only is it monochromatically beautiful, but an ideal piece of to trance out to. “I’m compelled to pursue this,” he says. “I never stop searching for ideas that could eventually turn into a song. I have hundreds of voice memos.” Some of them are “nonsense”, he cheerfully admits, but others will become a part of the Maxwell catalogue. Keep the faith with him and you’ll be amply rewarded. Maxwell is currently playing one-off dates in North America.

Joining Brad will be some of Corner Brook's finest singer songwriters.  Steve Caines (lead guitar), Rick Waterman (bass), Greg House (drums), Noah Hamilton (piano/keys), Phil Churchill (guitar/mandolin/ vocals), Geraldine Hollett (percussion/vocals), Bridget Swift (vocals), and Dahlia Waller (vocals).  Opening the show will be Bridget and Dahlia and Phil and Geri from The Once.  This show was an absolute gem last year and we are sure that this year will be no different.  The show sold out last year so we have added a second night.  Get your tickets soon before it's too late.