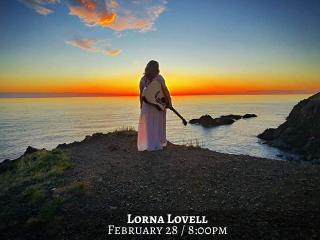 Lorna Lovell is an Indigenous Singer/Songwriter from Newfoundland and has delighted audiences at seasoned venues like the Trails Tales Tunes Festival and Writers at Woody Point. She has been a guest performer on both Village Beat and Local Sounds on Rogers TV, and her co-write with Rachel Cousins and Virginia Fudge, “Hope to Bring”, was recorded by Rachel and subsequently placed in the Citytv series, “The Wedding Planners”.

Years of writing and performing have helped develop her unique melodic style, although fans often say she captures the spirit of old time Classic Country. Her debut Contemporary Country album, “Whenever I Sing”, features 10 of Lorna’s original songs, was produced by Clint Curtis at Sevenview Studios & released February 28, 2020. With its’ hints of Pop, Rock and Blues, the album is emotionally charged, entertaining, and sprinkled with her charm & humour.

Releasing a debut Indie album right before COVID19 shut the world down was certainly challenging, but Lorna managed to land her first single, “Island Girl”, on several radio stations in Newfoundland and around the world, garnering fans from as far away as France & Japan! Lorna continues to write in 2020 – her song “I Can't Breathe” reached over 5000 views in 24 hours and was featured on VOCM radio.