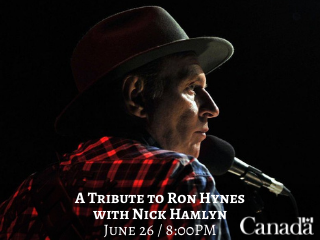 A Tribute to Ron Hynes

Frequently referred to as the “man of a thousand songs”, Ron Hynes’ songs have been covered by dozens of artists worldwide.   2007 ECMA for Male Solo Recording of the YearRon, hands-down is the best songwriter in Canada.” Larry LeBlanc, Billboard Magazine.

With a songwriting career that spans more than 30 years, Ron Hynes is a six-time East Coast Music Award winner, a Genie Award winner and a past Juno, CCMA and Canadian Folk Music Awards nominee. He’s been recipient of both Artist of The Year and the prestigious Arts Achievement Award from the Newfoundland & Labrador Arts Council, as well as a Lifetime Achievement Award from the St. John’s Folk Arts Council. Ron Hynes also holds an Honorary PhD from Memorial University for his songwriting and contribution to the cultural life of his beloved home province of Newfoundland (Canada).

Join Nick Hamlyn as he pays tribute to the incredible catalogue of songs from the man that had a thousand.

This event wouldn't be possible without the help of the Government of Canada.